Most Popular Cryptocurrencies In The World 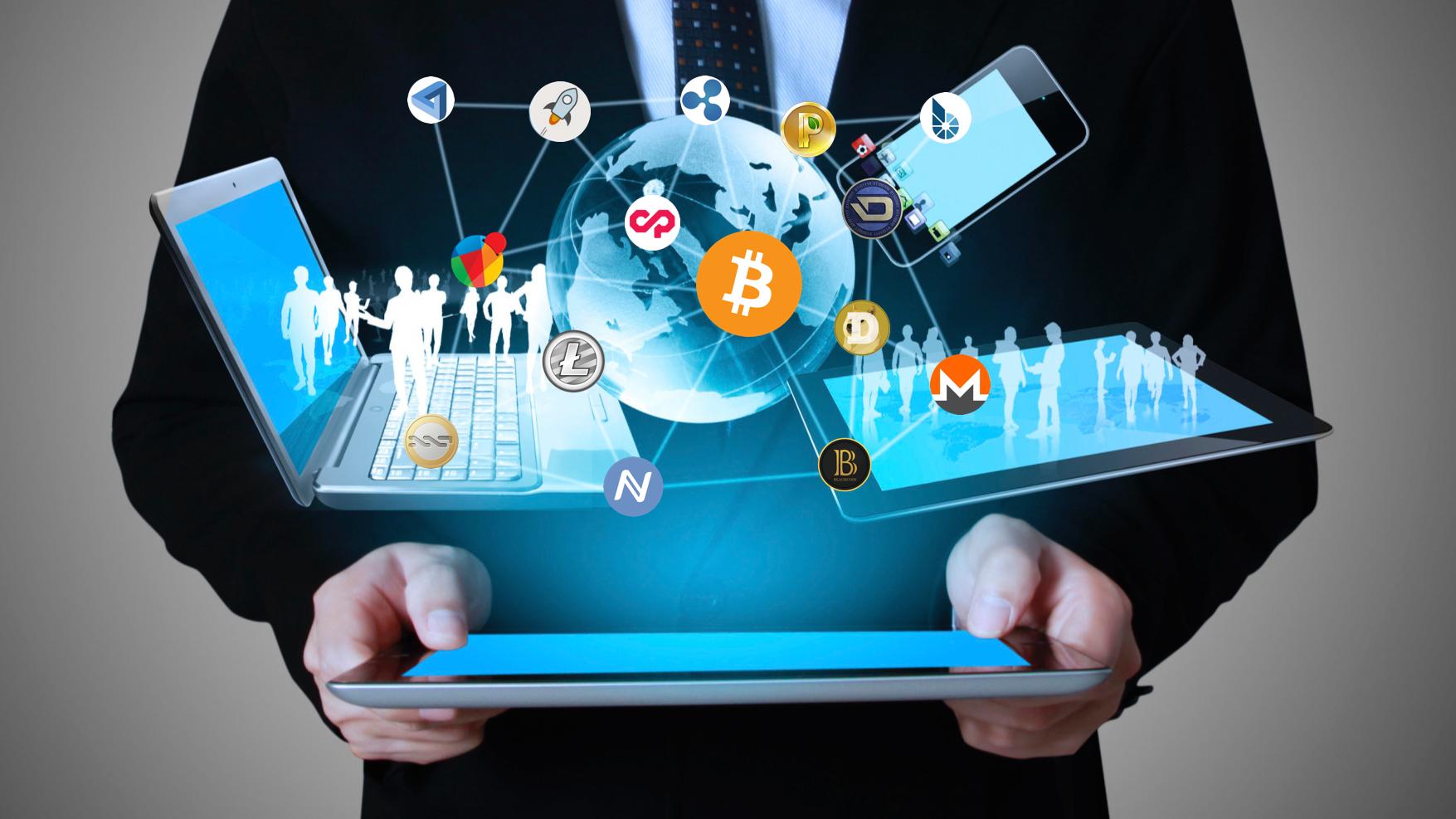 Cryptocurrency, or digital currency, is an invention of the Internet. Basically, someone out there thought, "hey, what if we can create a system where money is not bound by geography, like the internet" and lo and behold, now we have over 3000 cryptocurrencies going around.

Not all cryptocurrencies are created equal.

Some feature amazing underlying blockchain technology behind its creation. Some were created ‘just because’, or as a joke. Some were part of an elaborate pyramid scheme.

What to make of cryptocurrencies and blockchains

Some are pretty useless to keep as they are perceived as worthless – any cryptocurrency is only as valuable as the value assigned to it by a mass audience.

Like any other assets (think of stocks, or property), its price can rise and fall quickly, making them highly volatile and risky investments.

Here are the top 10 cryptocurrencies and what they are known for.

Note: The ranking was taken from CoinGecko, a website that ranks cryptocurrencies by developer activity, community and liquidity. All figures are accurate as of mid-July 2016.

The original cryptocurrency and the one that started it all, Bitcoin was created and released in 2009 by Satoshi Nakamoto, an anonymous figure. Bitcoin has the biggest market cap to date around $10billion, overshadowing all other cryptocurrencies in this list, combined.

Because Bitcoin has such a big reputation, all other cryptocurrencies are referred to as ‘altcoins’ – alternative coins because they are alternatives to Bitcoin.

Known for: being the first, easiest to get, widest acceptance

Ether is the cryptocurrency for Ethereum, a decentralised platform that can execute peer-to-peer ‘smart contacts’. As of September 2016 and as a result of an attack to The DAO, Ethereum was split into 2: Ethereum (ETH) and Ethereum Classic (ETC).

Created by Vitalik Buterin and launched in mid-2015 after a successful crowdsale, this platform was marketed as the "next generation cryptocurrency and decentralised application platform" and has a market cap of $1.1 billion.

Peer-to-peer smart contracts are what Ethereum is known for, aside from the cryptocurrency.

It enables people to code and enact contracts without third parties. For example, this guide explains how you can set up a smart contract for a conference, where organisers can sell tickets, set a maximum number of attendees, and provide refunds automatically.

Litecoin was released in October 2011 by former Google employee Charles Lee as an alternative to Bitcoin. Overall, Litecoin is similar (and familiar) – it can be mined, used as currency and transacted for goods and services.

Known for: alternative to Bitcoin, most similar to Bitcoin

Bitcoin is frequently mislabeled as an ‘anonymous’ currency (it’s not). Monero, on the other hand, is a cryptocurrency that focuses on privacy – using the ring signature technology, Monero is ‘secure, private and untraceable’.

At fourth place with $138 million in market cap, Monero is mostly used by individuals wishing to remain incognito on the web.

Known for: being a privacy-centric cryptocurrency

The next on the list, Ripple, is actually a real-time gross settlement system, currency exchange and remittance network. The cryptocurrency is called ripples. Released in 2012 and with a current market cap of $243 million, the Ripple system has been integrated into a few banks and payment networks to reduce costs.

Dogecoin was originally made as a ‘joke currency’ but have since garnered a real following. Modeled after the dog in the ‘doge’ memes, the cryptocurrency (released in December 2013 by programmer Billy Markus) is now frequently used to tip users in forums.

It is also frequently sent as donations in fundraising efforts – for example, the Doge4Water fundraising campaign raised thousands of dollars.

Dogecoin is now valued at about $25 million dollars.

Known for: ‘joke currency’, used for tipping and donations

Dash (short for ‘digital cash’) is a cryptocurrency with a strong focus on both privacy (using anonymization technology) and speed (of transaction).

It was rebranded from Darkcoin as an attempt to stop being associated with the ‘dark web’.

Ranked eighth in the list, it has a market cap of $77 million currently rolling out Dash Evolution, an attempt to make the cryptocurrency more user-friendly.

You can spend Dash at merchants accepting it (listed here).

Known for: being anonymous and fast

MaidSafeCoin (also known as Safecoin) is the cryptocurrency for the SAFE (Secure Access For Everyone) network, which is a security-centric data platform. Calling themselves a ‘crowd-sourced internet’, you can provide space in your computer in exchange for coins.

A number of decentralized apps now use the SAFE network to store data securely.

The market cap for MaidSafeCoin is about $39 million.

Known for: being a security-centric data platform

Lisk is a crowdfunded cryptocurrency, and a unique one – it brands itself as "the first modular cryptocurrency utilising sidechains". Unlike other systems on this list (aside from Ethereum), the Lisk system can be used by anyone to make their own decentralized apps (‘dapps’) in the programming language Javascript.

As such, this currency has practical application value and can be used to create many types of ‘dapps’, including social media platform, e-commerce store, and many others.

It currently has a market cap of around $25 million.

Known for: useful for programmers to make own ‘dapps’, the first to utilise sidechains

At its core, Storj a decentralized, open-sourced and encrypted cloud data storage which uses Storjcoin tokens to gain access and usage in the Storj network. The market cap as of mid-September is $8 million.

Outside of this list, there are also newer cryptocurrencies incorporating other types of advantages. 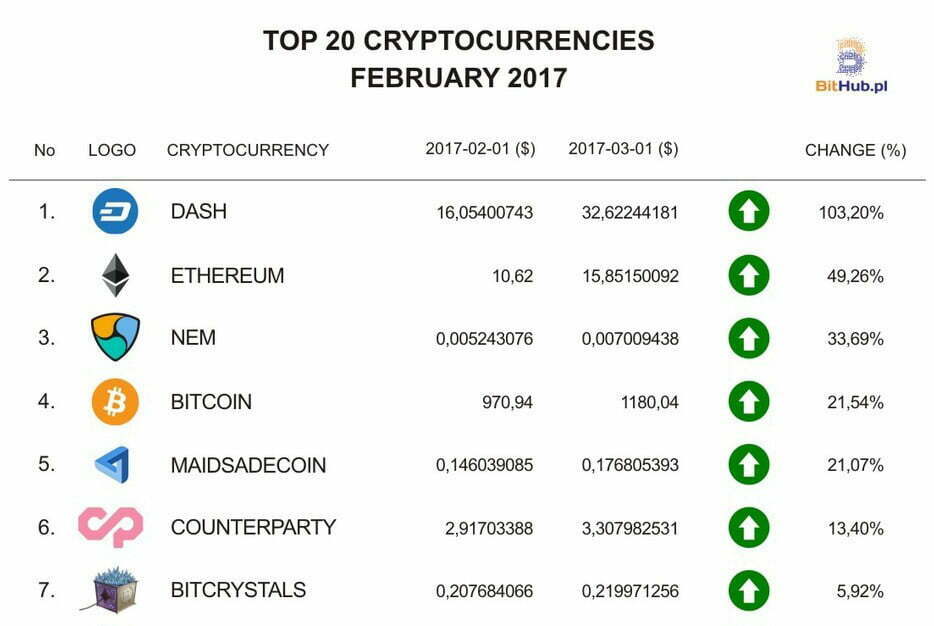 There are also other cryptocurrencies that sometimes weave in and out from this list, such as SiaCoin and Counterparty. Only time will tell if these coins will remain in the top 10 or will be dethroned by others.