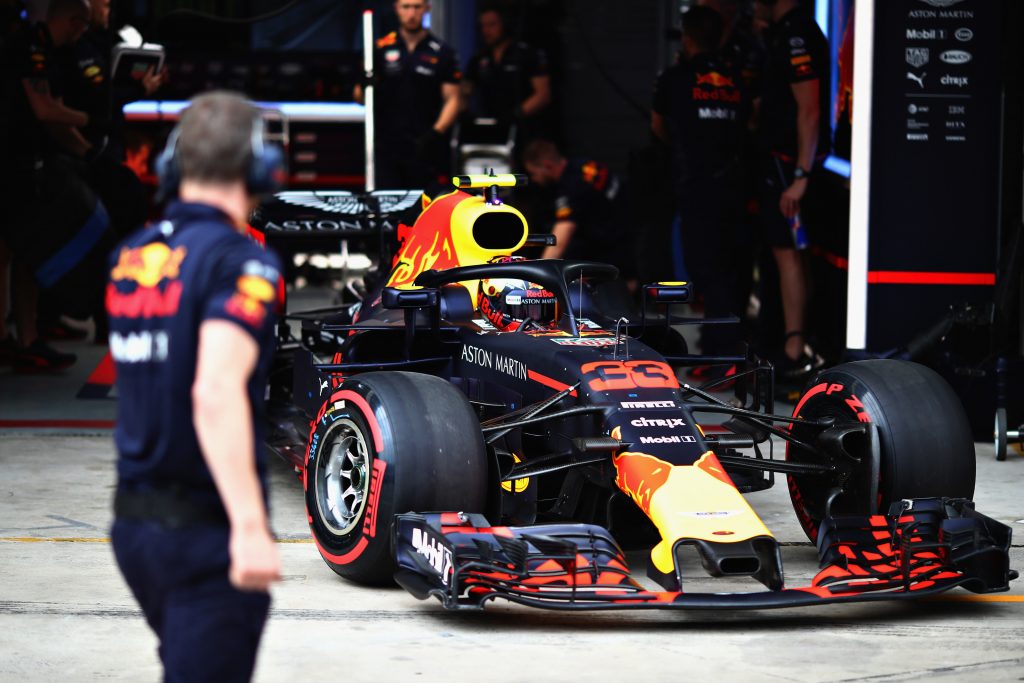 Do even cryptocurrencies fit Formula One?

Chris Harfield: I think they do. Cryptocurrencies, as of right now, are cutting the edge. The technology is futuristic.

And what Formula One does, it pioneers things in the automatic sector. Things that are for the future. When we talk about regenerating energy from F1 car’s brakes, it is a technologically advanced solution. That was pioneered in Formula One. And later it was distributed to the rest of the world. So, this approach aligns with cryptocurrencies. It is forward-thinking.

It is a revolution the way people use and hold money. Time will tell if it’s something that would be picked up by the masses. The same case is with Formula One developments. I’m sure that cryptocurrencies will be picked up by major population.

Why is FuturoCoin’s sponsorship so unique?

CH: It is unique because it is the first of its kind.

These days, it is very rare to be the first one within your industry to make that sort of sponsorship deal.

Thanks to the partnership with Aston Martin Red Bull Racing, FuturoCoin has become the first digital currency to ever sponsor Formula One team. There won’t be another chance for other digital assets to be the first again.

This is why it is a historic moment for the whole cryptocurrency industry, and it will be remembered forever.

Do you think, there will be others, who will follow the path of FTO?

It will be interesting to see, how the rest [of the industry – ed.] will initially react, and what they will want to do. Maybe, they will try to do more next time. Perhaps some digital assets will try to take over the name of the Formula One team.

Maybe this time next year, we will be calling it FuturoCoin Red Bull Racing.

Please, tell me, what really makes the sport better than music, movies or celebrities. Why is it better to sponsor sports teams rather than actors or musicians?

Joe Williams: Emotions. The emotions are a huge factor. You don’t have that with music or films. There is lots of passion, but the level of emotions will never be even close to those from the sport.

You don’t get millions of people tuning in every week to follow musicians or actors. Once a year, twice, maybe.

But not every week. In Formula One, you have 21 races all around the world, with this huge global viewership. It’s the media numbers and the wider range you get through Formula One.

That makes it so appealing.

CH: And the social side. Last night, there was a big football match.

You can’t watch  something new with your favorite actor every weekend. In the sport, you’ve got constant access to the massive fanbase that the competition has. Games are the only thing that people still do watch live. 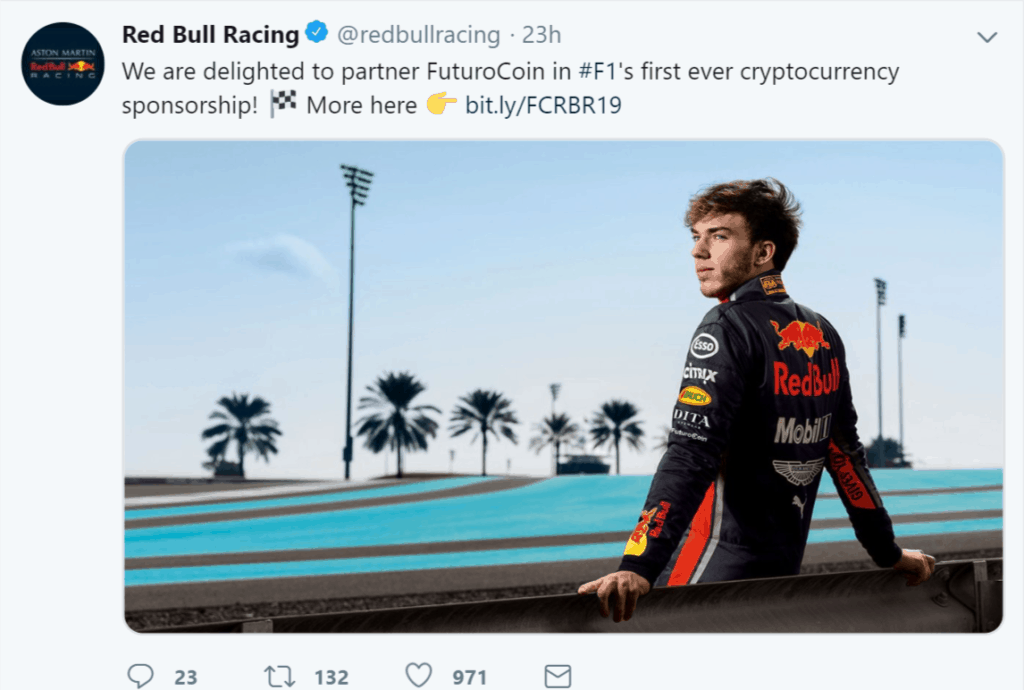 Other things, you can enjoy on demand. You can watch Netflix, where you can pause anytime you want.

You can always come back to that another time. In the sport, you just can’t do that. Because of that, brands will continue to promote themselves within sports.

If you look at the tv advertising, a lot of people change channels when the commercial is on or they leave the room. When it comes to sports event, you just watch advertisements on cars, equipment, etc.

But sports sponsorship is quite expensive, especially Formula One. So, do you think that the profit of this deal would be bigger than the costs?

JW: There are always different ways to measure the return of investment in terms of media exposure.

Everything has to be counted in. All brands measure success differently. They relate to many things, among others: the growth of the company during the period of sponsorship deal, the amount of social engagement they get, the followers, and the number of coin holders in the FuturoCoin’s case. We can’t predict the future. But based on the past, the data suggest that FTO will get the return of the investment.

Huge brands do that all around the world. They come into the sport and usually stay in the number of years, so it has to be profitable.

CH: It is always a tricky thing to measure the return of investment . This is the first partnership of its kind. It is the first time. So, we know as much as everybody else. We are waiting to see how this deal will develop.

Only after some time, we will be able to assess the whole cooperation.

However, Red Bull has struggled since Sebastian Vettel [former F1 Red Bull champion – ed.] went to the Ferrari team. So what would happen if Red Bull takes the last place?

JW: The success of a team is always important. It rubs off on brand and vice versa. You want to be involved in a winning team. A successful team. The early signs are that the Red Bull’s car is quite good this year. It is still very hard to read much from two weeks of testing. We will know more after the first race in Melbourne.

How has cryptocurrency revolutionised finances in 2020

I’m sure Red Bull will be successful. They’ve always been one of the top 3-4 teams, at least in the recent history of F1. I don’t see any major reason why that would change in the next two years within FuturoCoin’s partnership.

CH: Red Bull has been one of three teams to win races recently.

Aligning with winners is important. You need to aline with success. I’m sure, with the partnership of FuturoCoin, Red Bull Racing will continue the path of success.

So, let me twist that question. What will happen if Red Bull wins the championship? Does that make FuturoCoin even a bigger brand?

CH: It certainly helps. As far of tv screens, they follow the winners, right?

How to get idax cryptocurrency referral code

So, the more success the team has on the track, the more exposure of the brand is in the media as a byproduct of that. Success brings success, or at least success brings exposure. The reason why brands get into sponsorship is that they want to tell as many people as they can who they are, what they do. That is what the Red Bull platform would do to FuturoCoin. If Red Bull is successful, that will bring more opportunity to expose FTO.

So, this sponsorship can only help FuturoCoin?

There isn’t any downside?

CH: No, I don’t think that there are any disadvantages to the deal. The negative outcome, to me, equals zero. You are in Formula One, so you’re in Formula One. That’s it. What can be wrong about it? The negative in business is not doing anything. If you are doing it, you’re winning. FuturoCoin has already won. 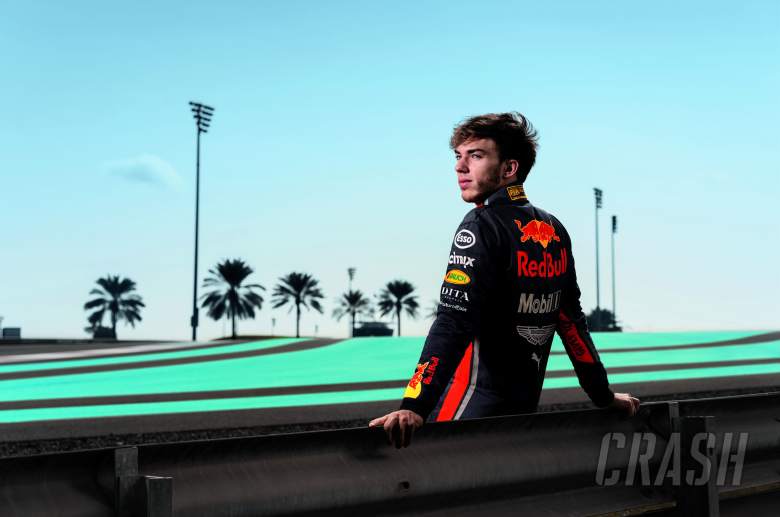